The Saudi sovereign Sukuk market continued its buoyancy in October and November 2021 with several developments in both the domestic and international markets.

The National Debt Management Centre (NDMC) of the Saudi Ministry of Finance (MoF) issued its eleventh consecutive monthly issuance of Riyal-denominated sovereign Sukuk on 16 November 2021 with a single-tranche SAR614.179 million (US$163.72 million) offering under the unlimited Saudi Arabian Government SAR-denominated Sukuk Programme. This means that in the first eleventh months of 2021, the NDMC has raised the equivalent of SAR75,341.593 million (US$20,008.36 million) through eleventh domestic sovereign Sukuk issuances.

The November issuance has a 12-year tenor maturing on 15 November 2033 and was priced at a final fixed profit rate/yield of 2.88% per annum, with total bids amounting to SAR614.179 million

The NDMC’s Domestic Sukuk Issuance Calendar for 2021 commits to a consecutive monthly Sukuk issuance strategy from January to December 2021. No other jurisdiction has committed to such a dedicated domestic Sukuk issuance regime in 2021. Moody’s Investors Services in October assigned (P)A1/Aaa.sa rating to the Government’s Saudi-riyal denominated Sukuk Programme for 2021.

In addition, the NDMC also completed the successful completion of its 3rd international offering during 2021 – a dual tranche Sukuk and bond issuance under the Kingdom’s Global Trust Certificate Issuance Programme and the Global Medium-term Note Issuance Programme with a total value of US$3.25 billion (SAR12.19 billion). The issuance, according to the NDMC, materialised partly because of “receiving investors requests” for such an offering.

“This transaction is part of NDMC’s strategy to diversify the investor base and meet the Kingdom’s financing needs from the international debt capital markets efficiently and effectively. The bid-to-cover ratio reflects the strong demand of the Kingdom’s issuances, confirming the investors’ confidence in the reliability of the Kingdom’s economy.,” said the NDMC.

Domestic Sukuk issuances are also driven by the objectives of the Kingdom’s Fiscal Balance Programme and Financial Sector Development Programme, the robust demand from local institutional investors, and the fact that foreign investors can also invest in local currency Sukuk through Tadawul (the Saudi Stock Exchange), which also has an active secondary trading in government Sukuk.

The Kingdom is by far the single most proactive sovereign domestic Sukuk issuer. NDMC’s role is to secure Saudi Arabia’s debt financing needs with the best financing costs. Saudi Arabia is ahead in tapping the domestic sovereign Sukuk market, because it has an established issuance infrastructure complete with a government policy framework under its Fiscal Balance Programme and Financial Sector Development Programme, whose objectives is to add to a diversified public debt fund raising strategy and to the development of the Saudi Sukuk and Islamic Capital Market.

In August the MoF appointed Al Rajhi Bank as a primary dealer in government local debt securities (Sukuk) to join Alinma Bank, Bank Al-Jazira, Saudi National Bank, and Saudi British Bank. They play an important role as market makers for government domestic Sukuk issuances especially for trading in the secondary market in accordance with the regulations of the Saudi Capital Market Authority (CMA).

By end October, the MoF and NDMC had signed MoUs with BNP Paribas, Citi, Goldman Sachs and J.P Morgan that paved the way for the institutions to join the Primary Dealers’ Programme of government local debt instruments, which is dominated by Sukuk.

Abdulaziz Al Furaih, Chairman of the Steering Committee at the MoF, stressed that the move is part of “efforts towards achieving the objectives of ‘Saudi Vision 2030’ by expanding the investor base in the local primary market to secure the Kingdom’s domestic debt financing needs and the goals of the financial sector development programme. It also aims to support the development of the secondary market by increasing liquidity of government local debt instruments and attracting more foreign capital.”

The MoF also announced in November the completion of an early repurchase a portion of existing issuer’s bonds and Sukuk due in August, September, October, November and December of 2022 with a total value of about SAR33 billion.

The NDMC aims to unify the Kingdom’s domestic issuances all under the Sukuk Issuance Programme. “This initiative started in 2020 and will be followed by other stages leading to the unification of all local issuances enabling Sukuk holders to benefit from Zakat recovery applicable to the Sukuk Issuance Programme in Saudi Riyal. This initiative is a continuation of NDMC’s efforts to strengthen the domestic market, and to keep up with market developments which is reflected in the increase of trading volume in the secondary market,” explained the NDMC. 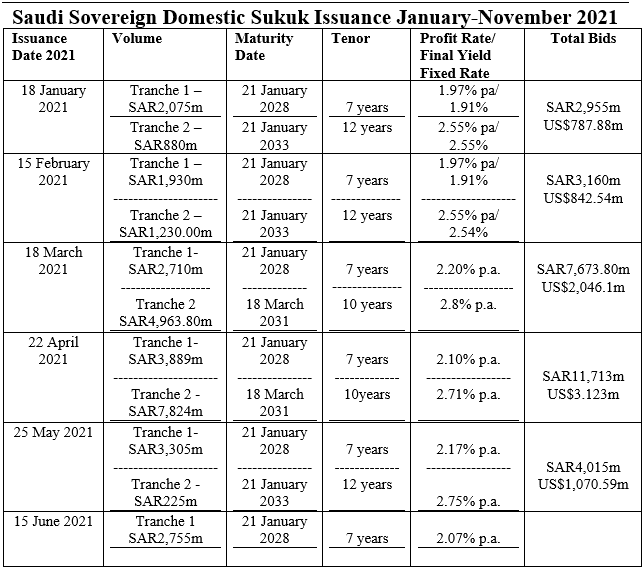 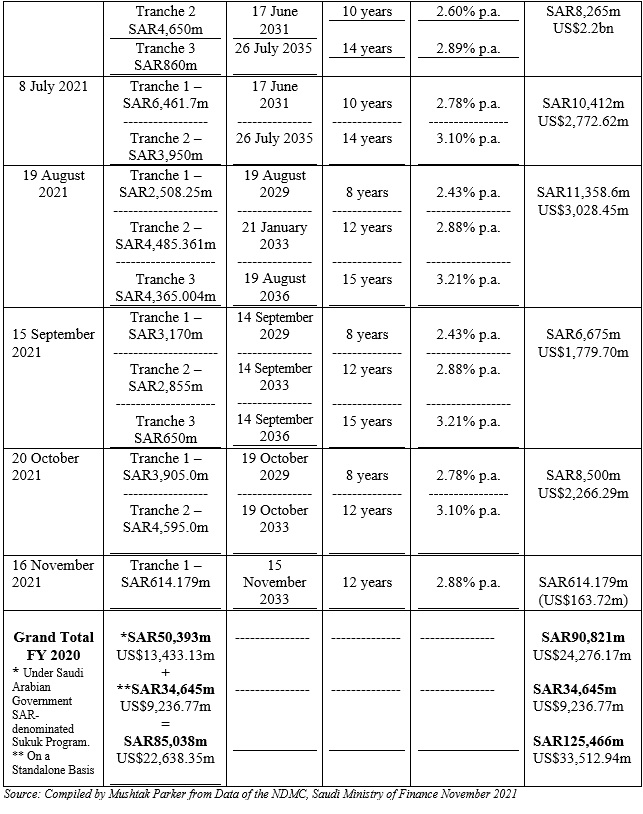