The National Debt Management Centre (NDMC) of the Saudi Ministry of Finance (MoF) issued its sixth consecutive monthly issuance of Riyal-denominated sovereign Sukuk with a three-tranche SAR8.265 billion (US2.20 billion) offering in June 2021.

This follows the closing of a similar two-tranche SAR3.53 billion (US$941.26 million) offering in May 2021 – all under the Saudi Arabian Government SAR-denominated Sukuk Programme. This means that in the first half of 2021, the NDMC has raised the equivalent of SAR34,141.065 million (US$11,301.39 million) through six domestic sovereign Sukuk issuances. The SAR8.265 billion (US2.20 billion) offering in June 2021 comprised three tranches through three auctions held on 15 June 2021:

The NDMC’s Domestic Sukuk Issuance Calendar for 2021 commits to a consecutive monthly Sukuk issuance strategy from January to December 2021.

No other jurisdiction has committed to such a dedicated domestic Sukuk issuance regime in 2021. Moody’s Investors Services in October assigned (P)A1/Aaa.sa rating to the Government’s Saudi-riyal denominated Sukuk Programme for 2021.

Last year, according to data compiled by Mushtak Parker for this newsletter from MoF statistics, the NDMC issued under its Sukuk Issuance Programme domestic Sukuk totalling SAR50,393 million (US$13,433.13 million) with total bids amounting to SAR79,100 million (US$21,085.17 million).

Saudi Sukuk issuance is expected to sustain its buoyancy in 2021, especially with the planned re-entry of the quasi-sovereign oil utility Saudi Aramco in the Sukuk market, which is a major boost for the Saudi and global Sukuk market this year.

Sukuk issuance, which is particularly suited to financing infrastructure and urban regeneration, is also relevant in the context of the efforts of the G20 to boost investment in these sectors, and through privatisation.

At the high-level “G20 Infrastructure Investors Dialogue: Financing Sustainable Infrastructure for the Recovery” in June, Saudi Minister of Finance Mohammed Al-Jadaan reiterated the Kingdom’s privatization plan that includes a pipeline of 160 projects across 16 sectors, including asset sales and public-private partnerships.

“Our aim is to secure about US$55 billion out of this privatization plan, of which US$16.5 billion will be in the form of public-private partnerships. We are looking to foster stronger partnership with the private sector on the management and financing of health infrastructure and services, as well as city transportation networks, school buildings, airport services, and water desalination and sewage treatment plants through these partnerships. The driving force is to create a better, more cost-effective, and efficient delivery, reducing material and energy usage for a better planet.”

Minister Al-Jadaan emphasized that infrastructure plays a significant role in boosting economic activities and fundamentally underpins productivity, providing a solid basis for strong, balanced, sustainable and inclusive growth. “Securing financing for sustainable development and quality infrastructure are ongoing concerns for the G20. The persistent infrastructure financing gap calls for swift actions in this area.” During the Saudi G20 Presidency last year, the G20 released the “G20/OECD Report on the Collaboration with Institutional Investors and Asset Managers on Infrastructure.”

Domestic Sukuk issuances are also driven by the objectives of the Kingdom’s Fiscal Balance Programme and Financial Sector Development Programme, the robust demand from local institutional investors, and the fact that foreign investors can also invest in local currency Sukuk through Tadawul (the Saudi Stock Exchange), which also has an active secondary trading in government Sukuk.

From 14 June 2021, Clearstream, the post-trading services provider of Deutsche Börse Group, started connecting the Saudi capital market to its network following an agreement with the Securities Depository Center Company (Edaa), a unit of Tadawul. This means that international investors could have access to and trade in the US$2.5 trillion Saudi capital market directly on Tadawul, with Clearstream the first International Central Securities Depository (ICSD) to offer international investors access to it.

This means that investors will no longer have to apply for Qualified Foreign Investor (QFI) status. Demand for Saudi government papers could be boosted which in turn could stimulate trading and liquidity in the system.

In the case of Sukuk, NDMC has confirmed that it’s Sukuk issuance strategy going forward centres around the Saudi Government SAR Sukuk Programme and foreign currency-denominated Sukuk issuances, as well as conventional bond offerings in the international market. This year’s plan will similarly be “through diversified funding sources which include domestic and international Sukuk and bond issuances as well as new financing channels, including Government Alternative Financing, [and] Supply Chain Financing, in addition to unifying the domestic Sukuk issuance programmes.”

The Kingdom is by far the single most proactive sovereign domestic Sukuk issuer. All the Kingdom’s sovereign domestic Sukuk issuances come under the unlimited Saudi Arabian Government Saudi Riyal denominated Sukuk Issuance Programme established on 20 July 2017 by the Ministry and updated on 20 July 2020 “to issue and offer, at its discretion, Sukuk in multiple issuances to investors, pursuant to the Royal Decree approving the National Budget.” The Programme, structured and lead arranged by Alinma Bank, according to the MoF, also comes as part of the NDMC’s role in securing Saudi Arabia’s debt financing needs with the best financing costs and would contribute to the development of the Saudi Sukuk and Islamic Capital Markets.

Saudi Arabia is ahead in tapping the domestic sovereign Sukuk market, because it has an established issuance infrastructure complete with a government policy framework under its Fiscal Balance Programme and Financial Sector Development Programme, whose objectives inter alia is to add to a diversified public debt fund raising strategy and to the development of the Saudi Sukuk and Islamic Capital Market. 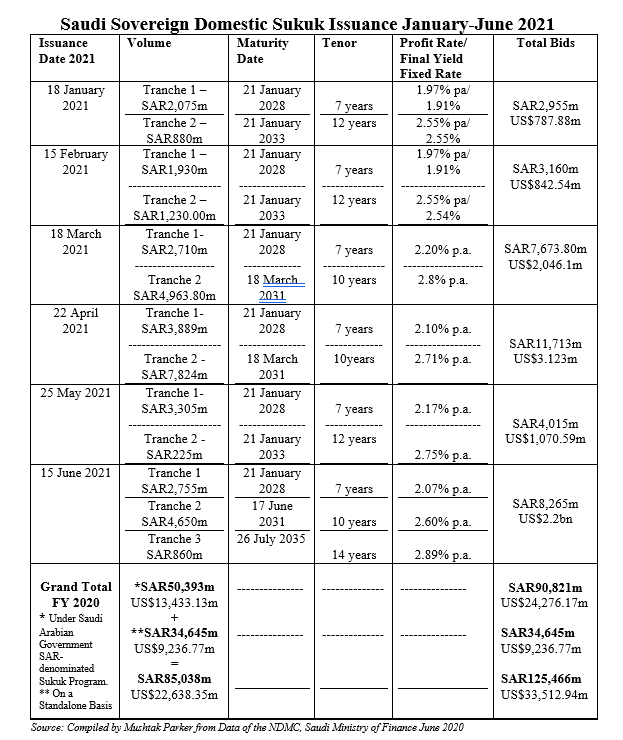