The National Debt Management Centre (NDMC) of the Saudi Ministry of Finance (MoF) Saudi Arabia continued its consecutive monthly Sukuk issuance under its Saudi Riyal-denominated Sukuk Issuance Programme with two auctions – one in June and the second in July 2022 – raising an aggregate SAR8,372 million (US$2,228.32 million).

The 26 July 2022 Sukuk auction also comprised two tranches with an aggregate SAR2,930.0 million (US$779.86 million), with bids in each case again matching the allocated volume:

As such, the NDMC Sukuk issuances in the first seven months of 2022 increased year-on-year for the same period by SAR11,500.02 million (US$3,060.88 million) or 19.27% respectively. This buoyancy in Saudi domestic sovereign issuance backed by the up-to-date data is contrary to rating agency and media reports of a dampening of Saudi sovereign domestic Sukuk issuances.

The Kingdom is by far the single most proactive sovereign domestic Sukuk issuer in the world. The NDMC’s 2022 Calendar of Local Sukuk Issuances, released in January, confirms the intention of issuing domestic sovereign Sukuk consecutively for each month of the year from January to December – the only sovereign issuer to commit to such a calendar in advance.

This commitment is partly driven by the robust market demand for Saudi Arabian sovereign domestic Sukuk certificates. The NDMC’s role is to secure Saudi Arabia’s debt financing needs with the most competitive financing costs. Saudi Arabia is ahead in tapping the domestic sovereign Sukuk market because it also has an established issuance infrastructure complete with a government policy framework under its ‘Fiscal Balance Programme and Financial Sector Development Programme’, whose objectives are to add to a diversified public debt fund raising strategy and to the development of the Saudi Sukuk and Islamic Capital Market.

The NDMC Sukuk are all issued under the unlimited Saudi Arabian Government SAR-denominated Sukuk Programme, which focuses on fixed-rate instruments “to hedge against risks of potential interest rate fluctuations.”

The true figure of the Kingdom’s domestic sovereign Sukuk issuance activity assumes even greater importance if we include “the standalone Sukuk issued by the NDMC in March 2022 under the Sukuk Issuance Programme in Saudi Riyal with a total value around SAR26.2 billion (US$6.98 billion).”

This transaction, says the NDMC, is one of its initiatives “to unify the Kingdom’s domestic issuances under the Sukuk Issuance Programme in Saudi Riyal, that represents the third phase of this initiative which was started in 2020 and it will continue until unifying all domestic debt outstanding.

“This initiative is a continuation of NDMC’s efforts to strengthen the domestic market and to carry on with the market developments which have been positively reflected on growing the trading volume in the secondary market. Further, this initiative enables NDMC to exercise its role in managing the government debt obligations and future maturities. This will also align NDMC’s effort with other initiatives to enhance and optimize the public fiscal in the medium and long term.”

This means that the actual aggregate volume of sovereign domestic Sukuk issued by the NDMC in the first seven months of 2022 reached SAR85,893.82 million (US$22,861.78 million).

In fact, in May 2022, the NDMC announced the completion of arranging local Sukuk issuances under the Saudi Arabian Government SAR-denominated Sukuk Programme for the debt principal repayments as per the financing needs for the year 2022, with a funding amount of about SAR43 billion (US$11.46 billion).

It further confirmed that it may, in accordance with the Annual Borrowing Plan, “continue to consider additional funding activities subject to market conditions and through available funding channels locally or internationally through debt markets and government alternative financing. This is to ensure the Kingdom’s continuous presence in debt markets and manage the debt repayments for the coming years, in addition to, facilitating the financing of capital expenditures and infrastructure projects which will contribute to promote economic growth while taking into account market movements and the debt portfolio risk management.”

He also added that the NDMC is working on attracting new capital, and international financial institutions to take part in the Primary Dealers Program, to capitalize on the debt instruments arranged by the NDMC.

The Kingdom received a further boost in July in Moody’s annual report on Saudi Arabia’s credit profile in terms of economic strength, institutions and governance strength, fiscal strength, and susceptibility to events’ risks with the ability to avoid or minimize their impact.

The report highlighted that Saudi Arabia’s credit strengths are derived from its robust government balance sheet, underpinned by moderate debt levels and substantial fiscal reserve buffers, in addition to its large stock of proven hydrocarbon reserves with low extraction costs, as well as a prudently regulated financial system.

Moody’s expects Saudi Arabia’s economy to grow at an average rate of 3.9% from 2022 to 2026. The rationale is underpinned by “the continuity of the government’s commitment to further fiscal consolidation despite elevated oil prices, the slow growth of oil production, the continuation of diversification projects with the critical mass moving into the implementation/construction phase in the next several years, and the structural economic, legal and social reforms that the government has been implementing to improve the business environment in Saudi Arabia that will begin to bear fruit in the form of higher private sector investment growth.”

In May, Fitch Ratings affirmed Saudi Arabia’s “A” credit rating and revised the outlook from stable to positive, followed by Moody’s affirming its “A1″ rating for the Kingdom albeit with a stable outlook. 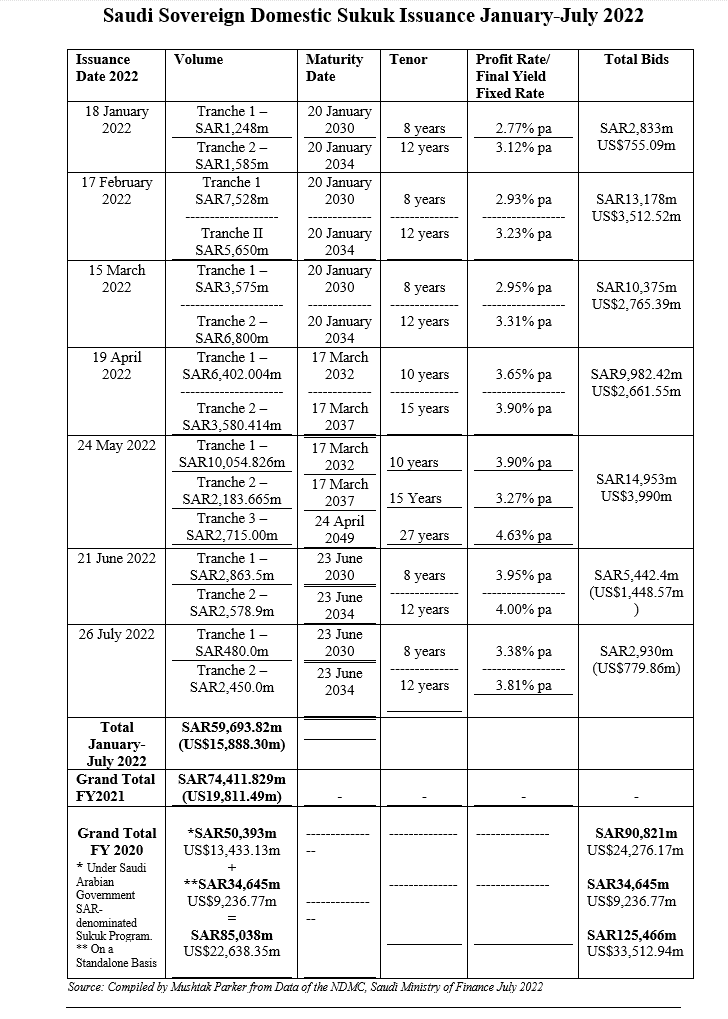