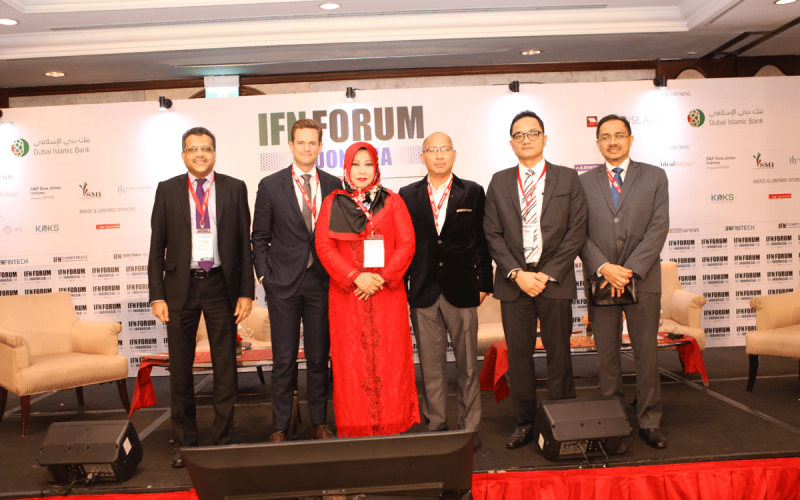 DDCAP, represented by Roslan Ahmad, Chief Representative of DDGI KL office, was delighted to sponsor and participate in the well-attended IFN Jakarta conference, held in the Indonesian room of the Shangri-La Hotel, with over 300 attendees, most of whom were local Indonesians participants. The opening speech highlighted the current performance of Islamic finance in Indonesia and its strong growth potential. The government recently established the National Islamic Finance Committee (KNKS) to synergize the efforts made by all Islamic economy stakeholders in the country and is looking to implement all social and economic activities in accordance with Islamic principles. It is also looking to lend strong support to the Fintech sector, which has been progressing well In Indonesia in recent years and is seen by the government as the optimal way of moving forward, not only to be in line with other global Fintech initiatives but especially in reaching the widespread Indonesian population.

Following the lead of the keynote speeches, subsequent panellists discussed the potential for Islamic finance in Indonesia. Bankers are optimistic about demand and encouraged other stakeholders to also support its progress either by facilitating or directly connecting economic and social activities with Islamic finance. Participants also suggested there were such opportunities for the government to lead by example in the drive towards Islamic finance, for example by paying the salary of government employees through Islamic banks.

Roslan Ahmad was one of six panellists in the session entitled ‘Outlook and Opportunities for Islamic Investments’. The session, moderated by Ariff Sultan, Regional Director (APAC) of IdealRatings, started by asking why Islamic investment had such a low market share of 6% of the total investment in the country. Dr. Hurriyah El Islamy, who has just been appointed to BPKH, a government linked fund management company in Indonesia, gave some insight into this, where she cited a lack of business investment proposals for the pilgrimage fund to invest in. Among the reasons she gave for this were a lack of experienced people to develop Sharia’a compliant products and proposals as well as a lack of initiatives from local players to promote Islamic investment in Indonesia. Roslan explained DDCAP’s role in propagating and supporting sustainability and responsible finance as an international intermediary and financial technology provider. He also described how the Malaysia government has promoted sustainable development since 1970 through various long term Malaysian plans. He gave as an example the introduction in 2009 of the Malaysian New Economic model, pursuing sustainable development based on  a high income nation,  inclusivity and sustainability, whilst currently Malaysia is implementing  its 2016 – 2020 5-year plan with the theme of “Anchoring Growth on People”. In addition to that, the Securities Commission of Malaysia (SC) has issued its masterplan to direct the capital markets in Malaysia in line with the global requirements, particularly in sustainable development and investor protections. The SC has also issued its SRI sukuk Framework, in advance of other global standards, as well as several other guidelines, including ASEAN Green Bond Standards (2017), Guidelines on SRI Funds (2017) and ASEAN Sustainability Bond Standards (2018). In addition, Bank Negara Malaysia issued a “Value–Based Intermediation” (VBI) framework in 2018 as a new initiative for Islamic banks to be proactive and progressive in delivering more impactful products and services. Roslan further explained that the VBI initiative aims to promote social, environmental and governance obligations beyond muamalah, namely the basic requirement of the maqasid al Shariah of ensuring that a bank’s products and services are Shariah-compliant (ie endorsed by the Shariah scholars), and is based on four pillars, namely an entrepreneurial mind-set, self-governance, community empowerment and best conduct principles.