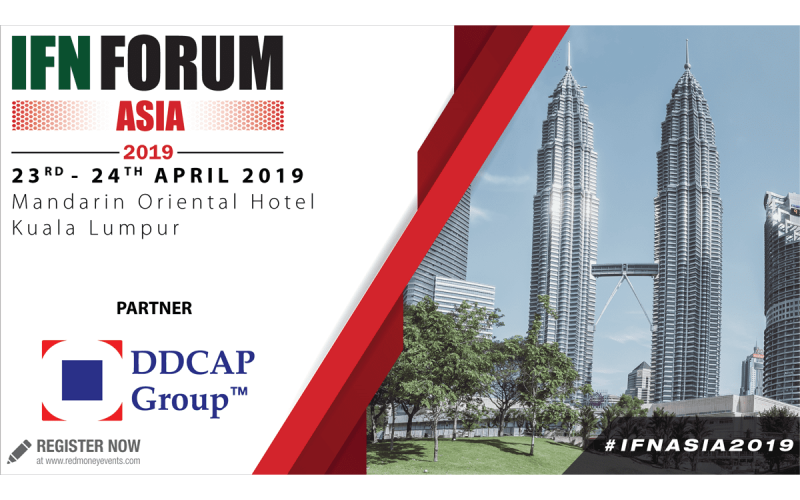 DDCAP Group ™ was proud to be a Partner of The IFN Asia Forum, which returned to Kuala Lumpur with its prestigious two-day event with a renewed focus on issuers and investors.

The Day 1 keynote was addressed by the Assistant Governor of the Bank Negara Malaysia, Mr. Adnan Zaylani who focused on the fundamental and basic tenets over-arching Islamic finance to achieve its ethical and moral conduct objectives as stipulated in the Maqasid Shariah.

An early panel session dealt with some important themes that resonated throughout the forum, namely the prospects and challenges for green and sustainable Sukuk issuances. There was optimism for the future prospects for such issues, though a slow initial acceptance by the market was noted. With huge potential from countries such as Indonesia, however, going forward growing demand for green and sustainable Sukuk was expected to fetch better pricing for such issues compared to the conventional bond market.

DDGI Limited’s Chief Representative in Kuala Lumpur, Roslan Ahmad, was proud to be a panellist on the Funding, Liquidity Issues and Supervision of Islamic Financial Institutions (IFIs) session. The panel shared their observations on creating High Quality of Liquid Assets (HQLA) for the purpose of liquidity management by IFIs. Complying to global regulators’ liquidity requirements is particularly challenging for IFIsdue principally to a lack of HQLA to comply with liquidity ratios. One of the reasons for the limited supply was due to the shortage of underlying assets to create HQLA, which in turn has led to the increased use of HQLA hybrid structures using Mudarabah or Wakala with Murabaha assets.

Day 2 started with a keynote address by the Deputy Chief Executive of Securities Commission, Datuk Zainal Izlan. He presented the progress of the Islamic asset management industry in Malaysia and its bright future prospects despite the slowing global economy.

The IFN Asia 2019 event ended with a discussion focusing on Shariah compliant REITs, where Saudi Arabia and Malaysia are the two top markets for such products.  It was expected that Malaysia will see further innovation with more asset classes to be developed in the future, with one example being Waqf, where high hopes were expressed particularly in the context of Fintech innovation.